Gina Parris Entertainment  is a production company that was founded in 2010 by Gina Parris in Trinidad and Tobago.  The company seeks to incorporate talent from all over the world, along with Caribbean talent into its productions, therefore creating an opportunity for the world to continuously see what the Caribbean has to offer. @ginaparrisentertainment

About the founder and CEO

Trinidad and Tobago native, Gina Parris, is an actor, writer, producer, and filmmaker, who has been involved in entertainment in Trinidad and Tobago for approximately twelve years. She moved to the USA to continue pursuing her entertainment career, where she graduated from The New York Film Academy with a Master of Fine Arts in Acting for Film (honors) and she is listed on the New York Film Academy website as one of their notable alumni. She has acted on stage, many times, using scripts that she wrote. She has also been part of the cast of various television shows and films shown in Trinbago’s cinema.

Gina is the founder and CEO of Gina Parris Entertainment Ltd, which celebrated its 10th anniversary in 2020 and where she also works as a producer and writer. In the USA, Gina co-produced a short for co-creator Mr. Freddie Basnight, which to date, has won 34 awards.

Gina is producer on her first docuseries called “Like A Dog With A Bone, A Visual Guide To Surviving In The Entertainment Industry” which she created.  This docuseries has been mentioned in a Voyage LA Magazine article, an article written by New York Film Academy about Ms. Parris, and was also mentioned on national television in Trinidad and Tobago during an interview with Ms. Parris, the interviewer was well-known host, director and producer from Trinidad and Tobago, Lisa Wickham. The docuseries was inspired by her own homeless experience, while pursuing her entertainment career. Ms. Parris is the creator, writer, one of the voice over actors and producer on the series. The docuseries features established individuals in the entertainment industry from Trinidad and Tobago and the USA. These include Nikki Crosby (first female stand-up comedian in the Caribbean), US legend Marla Gibbs (who was honored with her name being included on the Hollywood Walk of Fame) and her talented daughter Angela Gibbs (actor, producer, writer, director, and Gina Parris’s current acting coach).  Penelope Spencer, a renowned actress in Trinidad and Tobago, who has won multiple Cacique awards, and was Gina’s previous acting coach, is also part of this project. Other personalities attached to the series are Lisa Wickham (producer, director, TV personality, and Gina’s current mentor); actor Rafael Noble, (who acted in the Academy Award-winning movie Beginners and was Gina’s past acting coach); and American producer Franco Sama. Joy Ellison, a dialect coach, who works with Gina and many A-list actors, is also involved in this project, along with actor and comedian Gerry Bednob, actor, comedian and owner of the television station named Gayelle, the Caribbean, Errol Fabien, and music artist manager, Simon Baptist. The main cast has talent from Trinidad and Tobago and the USA, who are striving to make names for themselves.

Gina won an award in 2014, for the script for her first television show called, The Honest Honestest Truth, where she was an actor, screenplay writer, creator, producer, and co-executive producer. The award was in the form of funding, from the Trinidad and Tobago Film Company. The show aired in Trinidad and Tobago twice as a TV movie on the local popular television station, TV 6. Several sponsors were involved in the show, amongst whom were “Redbull” and “Coca-Cola”. Ms. Parris was deeply honored when the first black Miss. Universe, Janelle ‘Penny’ Commissiong (Miss Universe 1977) showed her support for The Honest Honestest Truth, which was labeled by one of the local newspapers as “T&T’s (Trinidad and Tobago’s) first detective drama.” The TV show had a great cast, amongst them Trinidad and Tobago celebrities such as Jason Williams (one of the Power Soca Monarch winners in 2010), comedian Allan Emmanuel, and actor and comedian Errol Fabien.

Gina’s award-winning short film called “A Twist of Life” was selected for The Indie Night Film Festival (festival is supported by Emmy Award-winning casting director Robi Reed), The Metro Film and TV Awards, The Caribe Film Festival, the ABA Film Society showcase at New York Film Academy and The Equality International Film Festival. The film also featured prominent actor, based in Los Angeles, CA, Gerry Bednob (actor in The 40-Year-Old Virgin, and other great films). The short, A Twist of Life, is currently being shown on the online television site, irietimestv.com as reruns and on-demand. A Twist of Life was Ms. Parris’ thesis film. She produced the film, acted as the lead actress, and wrote the screenplay for the award winning short.  A Twist of Life was first screened in one of the theatres at Warner Brothers studios.

Gina is also a member of the Academy of Television Arts and Sciences (the organization that gives the Emmy Awards) and Women In Film Los Angeles. She was mentored under Women in Film by Sara Scott, Vice President of Production and Development, Universal Pictures and Randi Richmond, who is SVP, Production at NBC Universal. Gina is also a member of Powerful Ladies of Trinidad and Tobago. She was also inducted into the prestigious Marquis Who’s Who biographical registry.   She also has a Master of Arts in Counseling and a Bachelor of Arts in Behavioral Science.  Ms. Parris has appeared on the alumni panel of the first New York Film Academy Black History Month Alumni panel in 2021, and in various articles and interviews over the years. 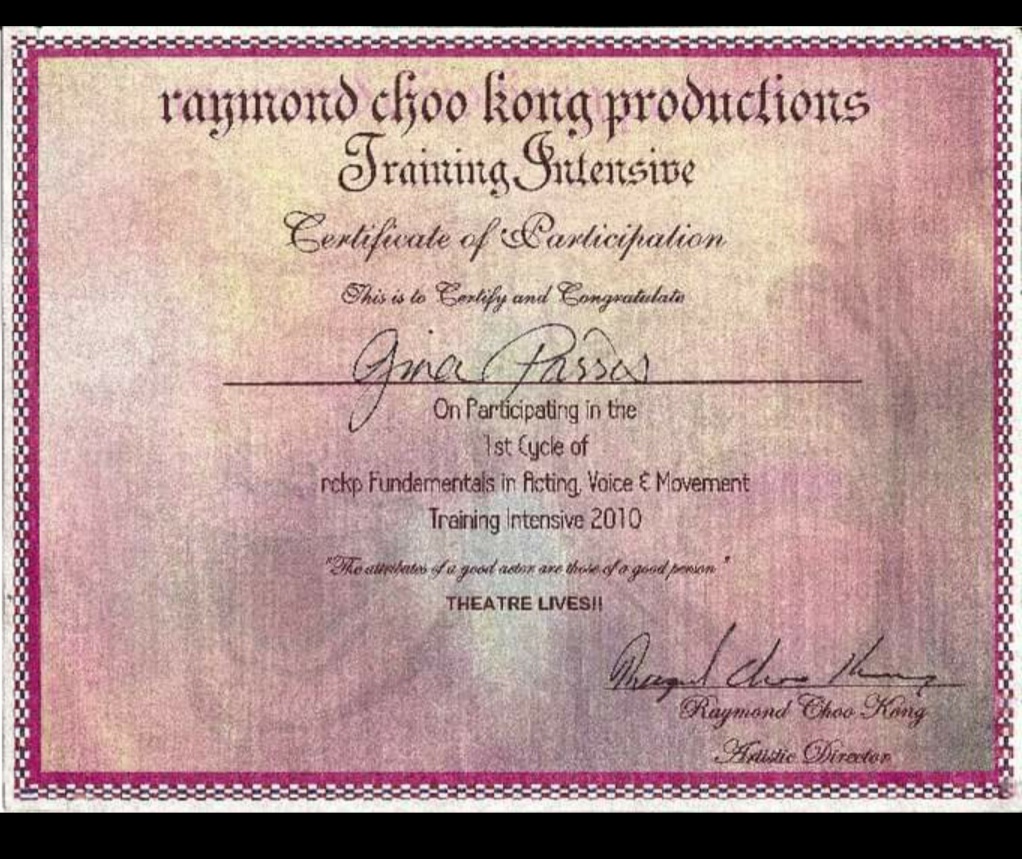 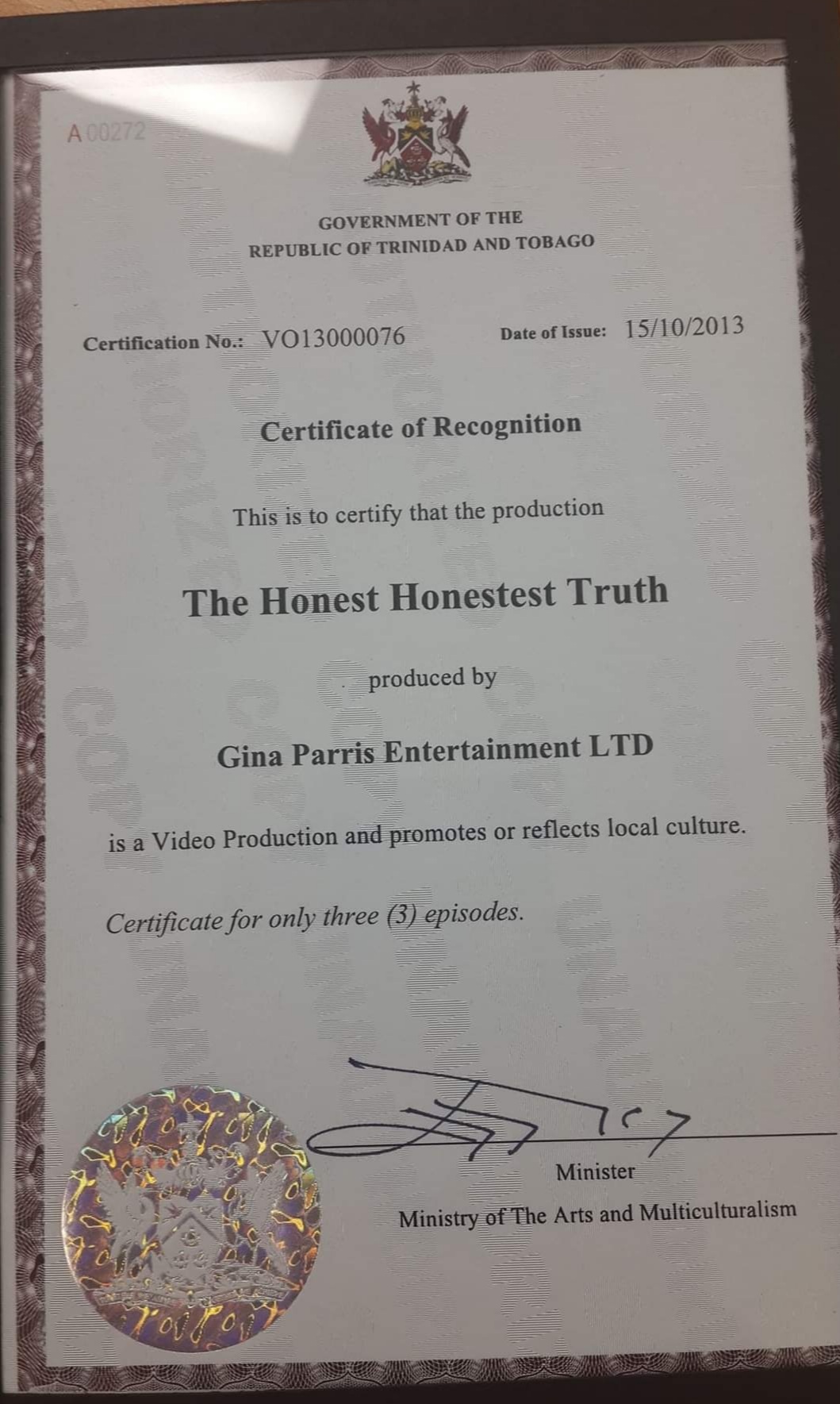 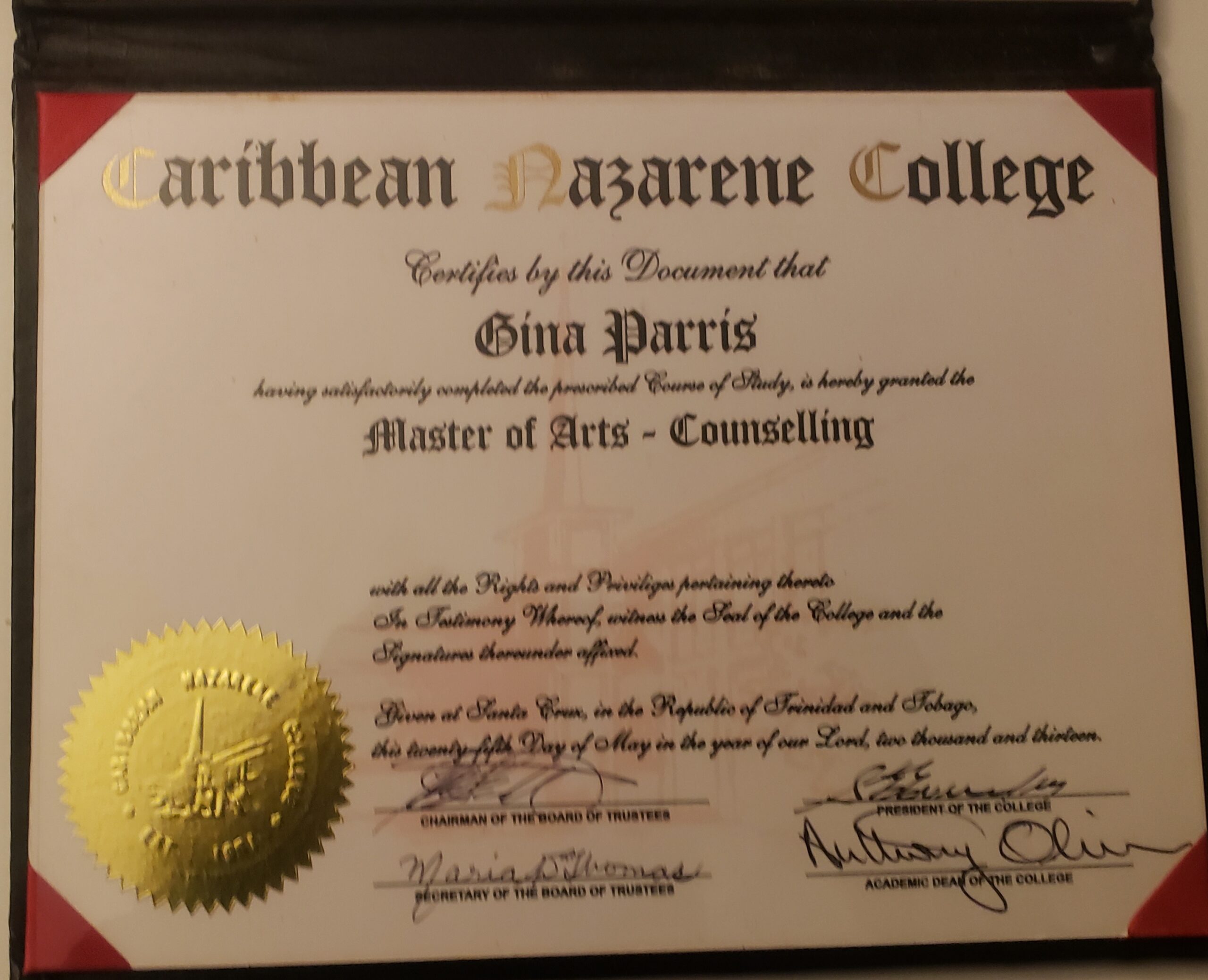 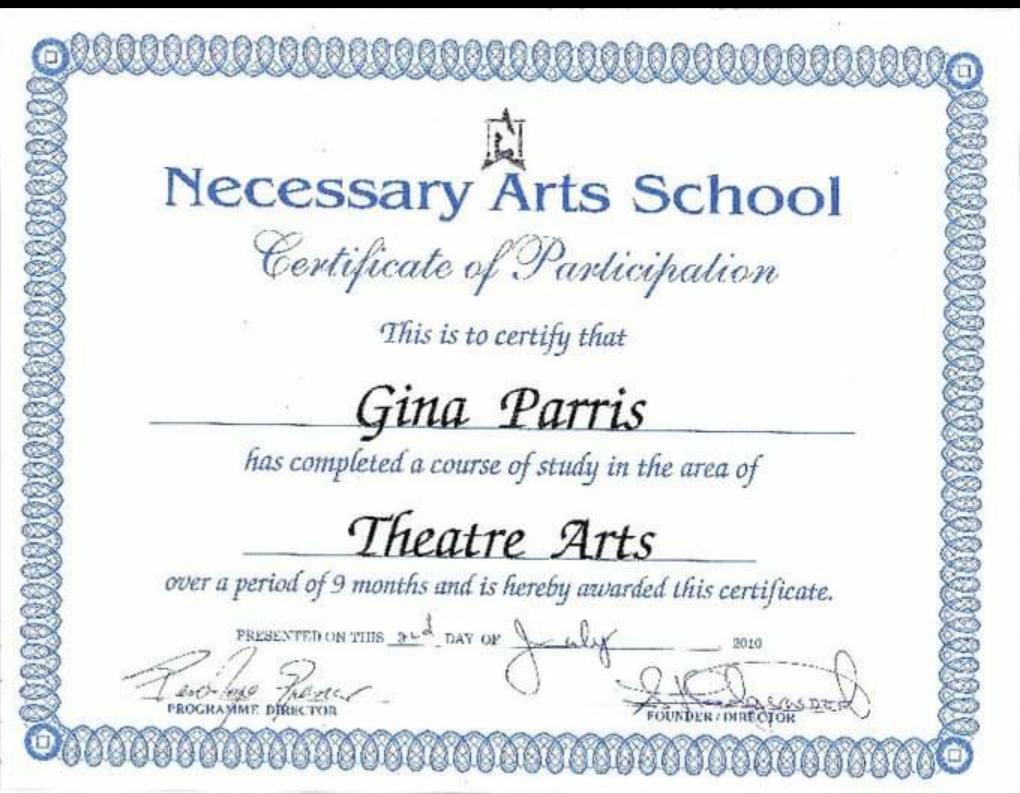 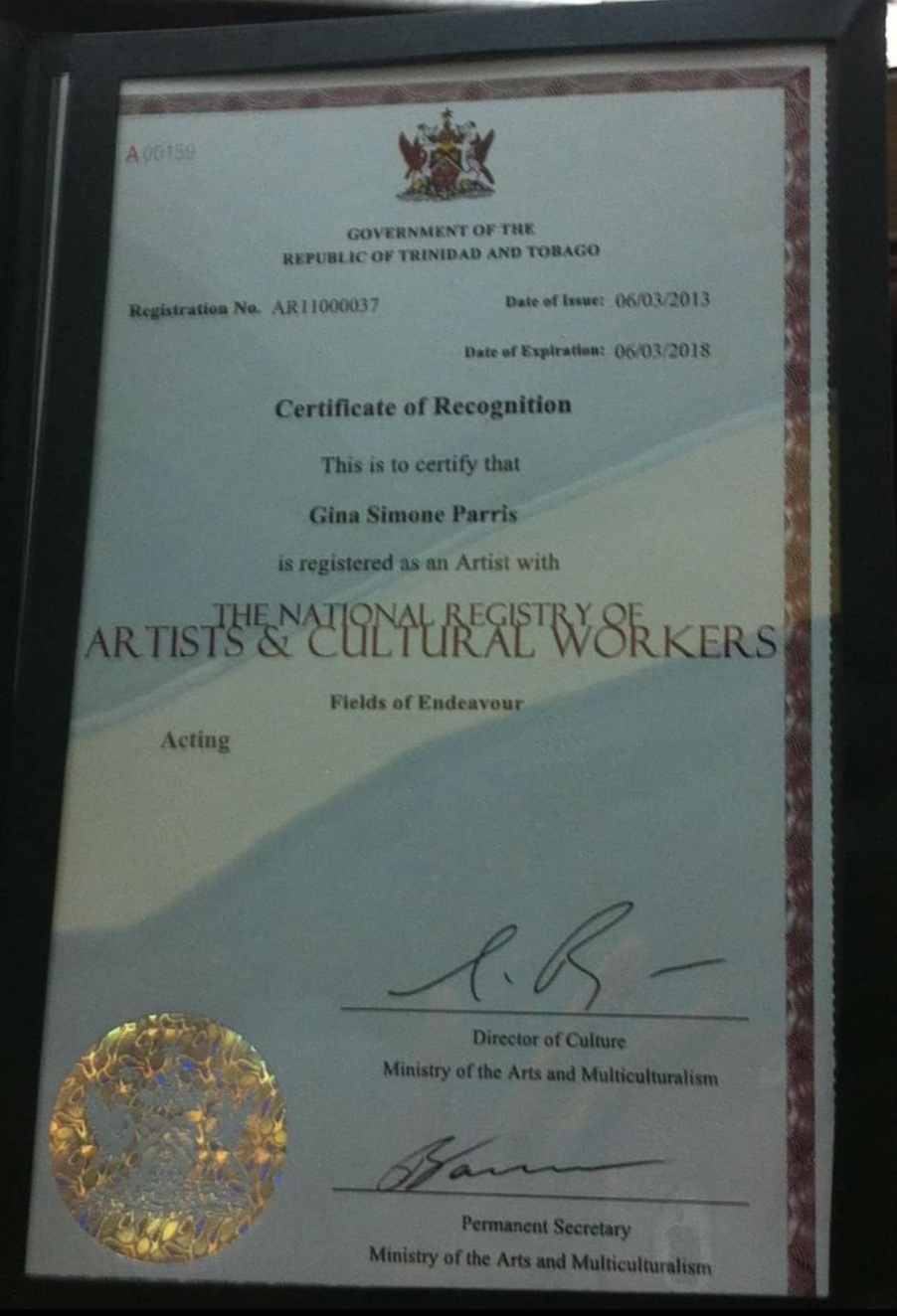 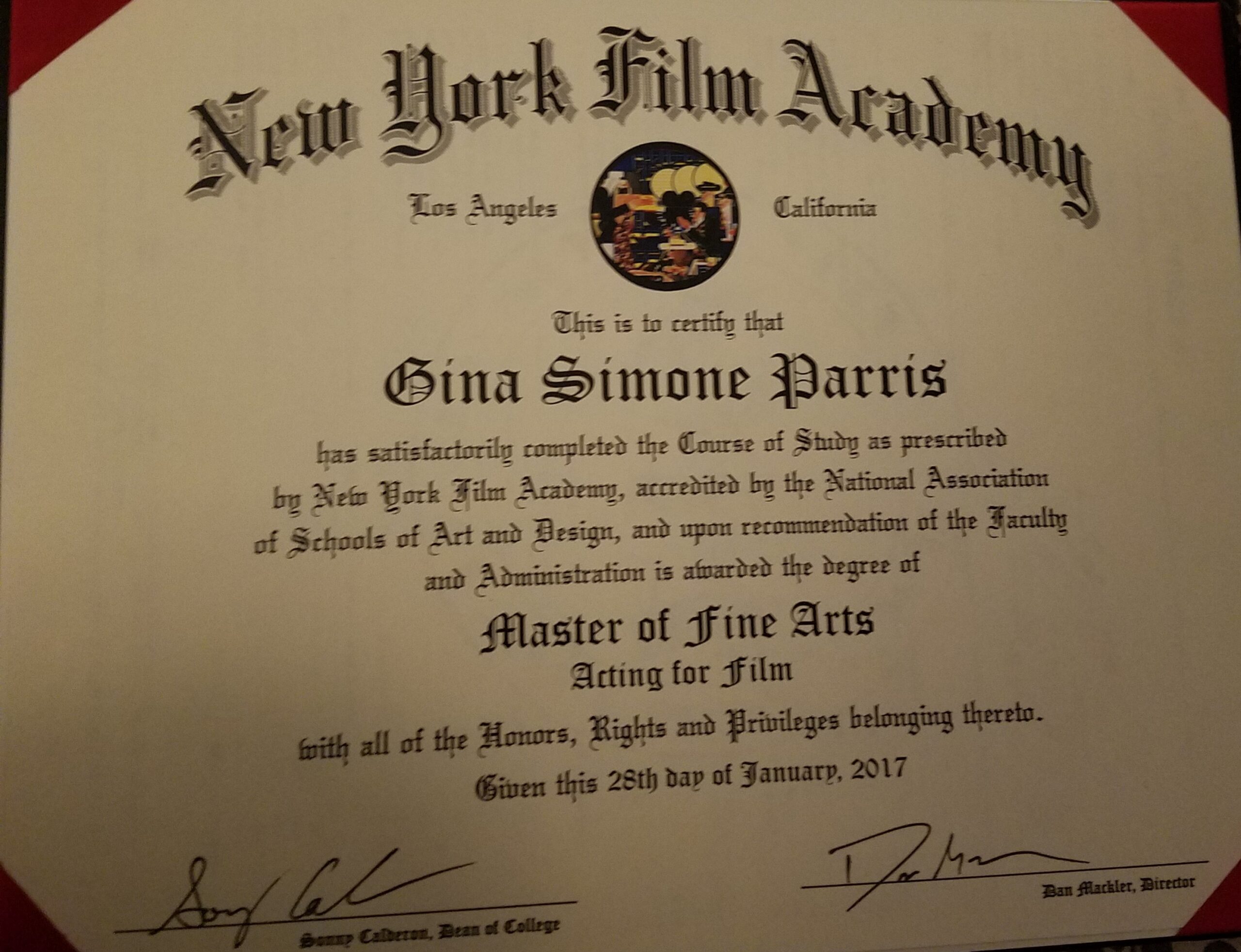 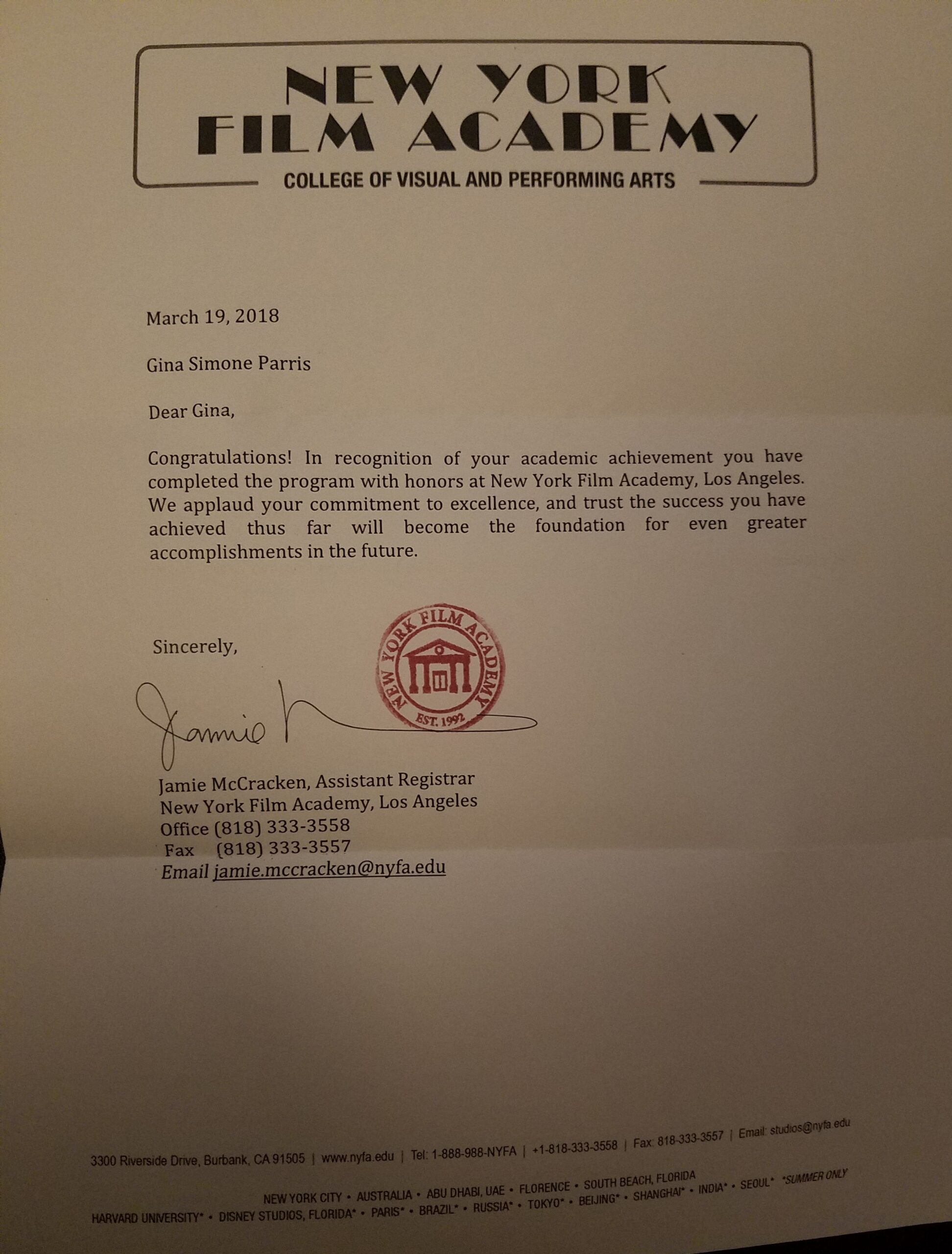 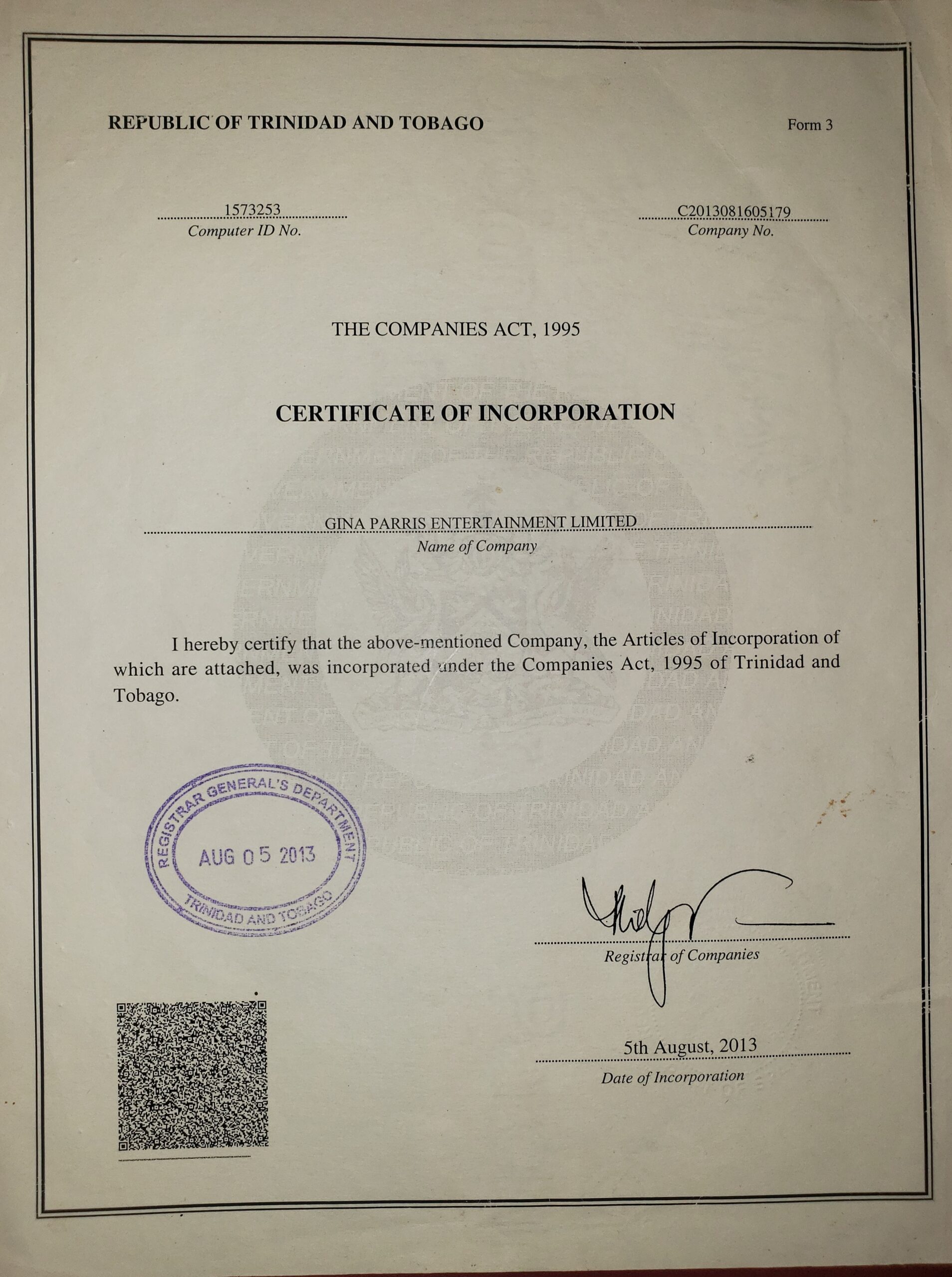 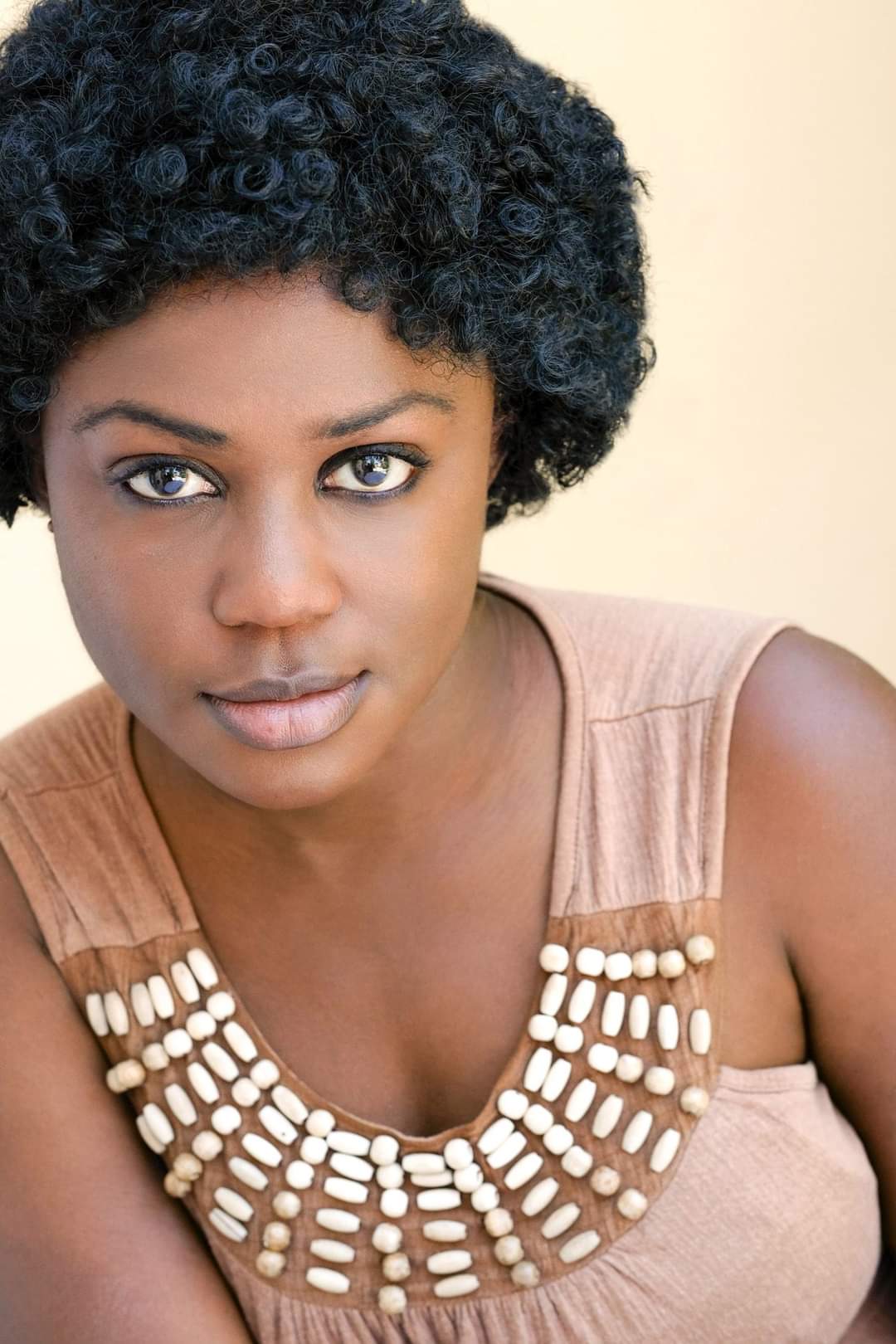